If you want to guarantee that your event is truly memorable, James Kellogg Jr is the perfect choice! His magic show is filled with witty humor and audience participation that will captivate your audience and leave them wanting more! His Mentalism is a mind boggling spectacle that will leave your audience in awe.

Amazing Illusionist and Mentalist James Kellogg, Jr. has performed over 6,000 shows all over the world including over 200 appearances as the featured stage magician at Legoland California, as well as thousands of magic and mentalist shows at numerous fairs, expos, community and military special events.

James Kellogg, Jr. with no doubt captivates audiences of all ages. His shows are customized to fascinate and entertain your guests at any event from kid’s shows to adult audiences.

James Kellogg, Jr. is a native Californian, who has always had a passion for entertaining. At the early age of 5 he found out that performing magic was a great way of getting attention. He presented his first magic show to children at his elementary school at the age of 9. He then performed and won the original “Gong Show” at the age of 10. His pursuit of entertainment and magic has continued throughout his life. Mr. Kellogg has performed award winning close-up magic, parlor magic, stage illusion and mentalism shows and is a renowned comedy stage hypnotist. His talent has landed him on television and allowed him to perform in some of the most prestigious venues in the country and abroad. He has made countless people smile, laugh and gasp in every show he performs.

"Providing laughter and smiles to even just one soul each day completes my daily goal. Whether it be in line at the store or one of my largest shows, knowing I have the ability to lift a spirit, entertain, and bring people together brings me happiness. My honesty and integrity not only in business, but as a gentleman, father, and friend, combined with my talents and skills, are sure to provide you with a successful event!"

"Reality is merely an illusion, albeit a very persistent one."
-Albert Einstein....

Watch as Master Illusionist James Kellogg, Jr. creates a blend of psychology and misdirection to create an amazing experience where the seemingly impossible is made possible, minds are read, thoughts are projected, and you leave a true believer. With his charismatic stage presence and contagious sense of fun, this interactive experience will captivate even the most skeptical of audiences.

The show is a unique blend of Illusionism, mentalism and mind-reading that is designed to wow your guests and leave them scratching their heads long after the show is over. It is carefully choreographed to maximize audience interaction and leaves everyone wanting more.

Have you considered amazing your clients or guests with magic right before their very eyes! James will stroll around performing thrilling, mind-boggling magic for your event. Close-up magic is a perfect way to entertain crowds at corporate parties, conventions, in restaurants, at weddings or holiday functions. Whether your guests are waiting to be seated, enjoying a meal, or you need to build a crowd at your convention booth, James’ close-up magic will ensure that their experience is unforgettable!

James’ amazing parlor magic shows are 30 or 45 minutes of high- energy entertainment with lots of audience participation and interaction! His incredible adult magic shows are always laughter-filled and are guaranteed to create happy memories for a lifetime. James customizes his magic shows to cater to your event. Whether you are hosting an adult party at your home or a corporate event for hundreds of employees, James will create magic at your event!

For those large events when you need the BIG stage illusion show. James and his team will take you and your guests through the fantasy world of magic, with a touch of class, humor and amazing illusions. Get ready for the greatest Las Vegas style magic show you have ever seen. This show is for 300+ guests with full stage requirements, and can be customized to your needs.

Awesome videos and pictures from the magic show!...

There are lots more pics and videos, check them out on...

We WANT to hear from YOU!

Tweet us your questions and comments about the shows. Check out pictures of me performing his mind blowing Mentalism show!Follow all the comments and keep up on shows in your area. 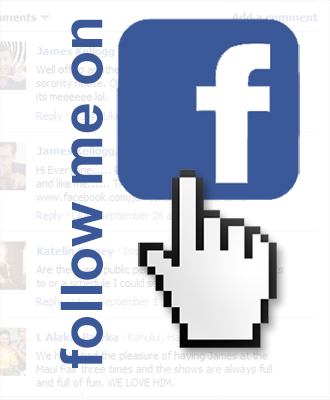 Hey, wanna have some fun? Check out these amazing games and discover how our senses trick us all the time. The answer is at the bottom of each picture. Enjoy!

A few memorable past performances

Your feedback is greatly appreciated! It motivates all of the people involved in bringing you this show to strive for constant improvement. Thank you so much!

James was an amazing performer - professional, organized, friendly, and accommodating. We had a problem with our sound system, and he generously offered his equipment, and then worked with us to set everything up. We expected him to go on at 9 p.m., but the kids were ready to go 40 minutes earlier. James enthusiastically offered to fill in the time and go on earlier. He also provided a list of "topics" for the show and gave us examples of the language and "humor" used in the show so there were no surprises. We would absolutely recommend this performer for a school event because you will have a full understanding of the show contents before he even takes the stage.

Hire this guy!!!!!! It was the funniest show I have ever seen. During the show I was drinking a pepsi and something funny happened on stage, my friend was dancing with a wig on his head. I laughed so hard the pepsi sprayed out of my mouth all over my friends. This guy is hilarious. Thank you for the perfect show.

Ms. Theresa Smith was very good at handling logistics for the show. She answered emails timely and made sure that everything was taken care of to have the show on Hopi. From the many comments I have had from those who attended, it was very entertaining and funny! Everyone seemed to have a great time and are still laughing about this great show! To Mr. Kellog Jr. I want to thank you personally for a great time and for lifting our spirits! As people we always need a great laugh to keep us going in our daily lives. Thanks for closing our cancer conference out with much laughter and happiness!

James is a great hypnotist and tailored his show to our most conservative parent's wishes for grad nite. The audience was totally engaged with the performance and didn't want the show to end. Almost everyone who went on stage was able to be hypnotized along with a couple of kids in the audience. I'd hire James again in a minute for any event

Everyone loved the show, He performed in front of several hundred high school students at a time and kept everyone entertained the entire show. I would definitely consider having him to do another show in the future.

James showed up early and was very helpful in making sure everything was perfect for our group. His stage manager made the set up quick and after a sound check they were ready to go. The show was so funny and everyone had a blast. I can definitely say with confidence that James Kellogg Jr. was the highlight of our event.

I was very satisfied. Not ever haven seen his performance, and only relying on the website and comments, I was a little scared. It turned out great. The hardest part was to get people to volunteer. Theresa, James secretary, was very very helpful, and was a big part of why I chose James.

I was concerned about having a Hypnotist at my daughters 16th birthday. James did a fantastic job! All the kids were laughing and my daughter had the best birthday ever. I would highly recommend James Kellogg for any event. Good clean fun.

The kids had a great time! Evan after the adrenaline let down of graduation an hour long bus drive food and entertainment for 2 hours before James performed he left them yelling for more! He did a great job and was very accommodating for our group. Job well done!

I have had James perform before and I will have him perform again. Simply the best entertainer I have ever worked with. .

James was very personable and professional. James had a TOUGH crowd full of Police detectives. Not many volunteered to go up. He worked hard to get them to relax and the few that went were fun to watch! He put on a Great show!

James is extremely professional and very easy to deal with - he also has an office assistance who is very responsive to any questions that may come up.

James was perfect for our audience. He kept the show moving and everyone laughing. We couldn't believe it was over so fast. James was very professional and took care of everything including the sound. This was a big change for our family night from bingo and everyone really enjoyed the show. We will definitely have him back again!

Mr. Kellogg was a pleasure to work with, he was professional and fun! He was great, and seemed to adapt well to the audience he was working with.

James performed at my husband’s 50th surprise birthday party and was absolutely wonderful. We had many more people come to the party than we were expecting which caused his performance area to shrink but he was very kind and accommodating about it. He just took a tiny area and made it into a wonderfully hilarious show. He was professional and patient and very easy to work with, as well as his assistant Theresa, and I would highly recommend him to anyone. Thanks again so much, James.

James Kellogg performed for a our Mandalay Travel Club motor home rally in Hemet, Ca on March 4,2008. It was the funniest evening’s entertainment that we have ever had!!!!!!!!!!!!!!!!

Would you like to have James perform @ your next event?

Alternatively, you can click here to open our contact form
and we will get back to you within 24 hours.

Once you have agreed to our Terms of Use, and entered the media kit - you will have access to the following:

We have a Magic Store!

Do you love magic? Would you like to know how it’s done?
Well, today is your lucky day!

3 Generations of Magic is the shop for anything magic!

Here you will find magic supplies, novelties, gag gifts, costumes, DVDs, books, props and so much more. Come and visit us at our San Diego location on 741-B Olive Ave. Vista CA, 92083 or online at www.3generationsofmagic.com 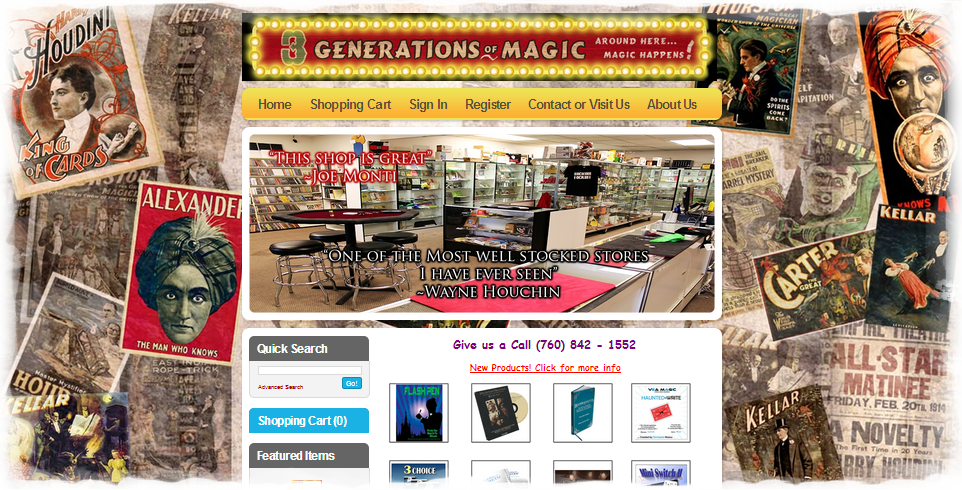 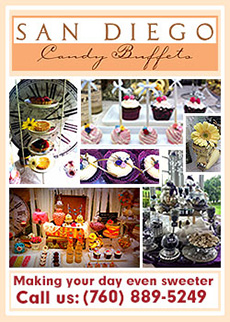 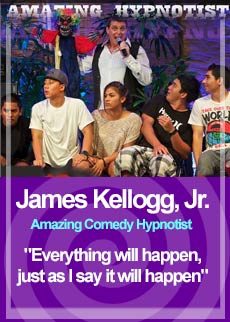 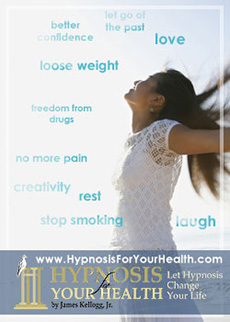